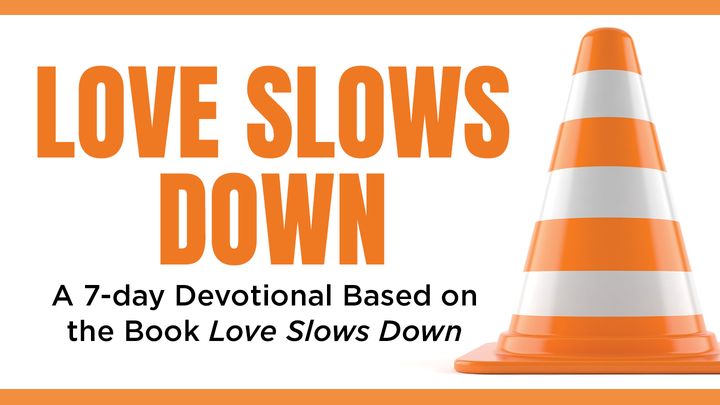 As I went looking for our next devotional about dads, I found this one named “Love Slows Down” by Joël and Jonathan Malm. In a world where we see so much of a desire or need for instant gratification the topic of slowing down is interesting. In a world where everyone is busy and always on the go the topic of slowing down is intriguing. Today’s devotional draws us in with the statement “We were made from love, made for love, and are called to live in God’s love.” Today’s devotional is based on the book “Love Slows Down” by author Joël Malm. Looking to learn more about the book, it speaks to how packed it is with truth, guidance, and spiritual wisdom. This devotional will carry us through a week as it is a 7-day devotional. Its introduction shares how it will help us slow down and trade in anger, anxiety, and hurry for life with God’s love! I’m excited to get to see where we go.

‘Get rid of all bitterness, rage and anger, brawling and slander, along with every form of malice. Be kind and compassionate to one another, forgiving each other, just as in Christ God forgave you.’

Ever felt stuck and weren’t sure why? Ever felt down and wondered if there was anything you could do about it? Ever felt like you were stuck on a downward spiral and wondered what to do? God’s Word is filled with wisdom and direction for us. God’s Word points us to the things that cause us to feel stuck. God’s Word points us to things that drag us down. God’s Word calls us to stop and look up to Him and cry out to God rather than continuing to fall on a downward spiral. So let’s be the dads who turn to God quickly when we feel stuck. Let’s be the dads who turn to God quickly when we feel down. Let’s be the dads who look up and cry out to God when we are spiraling out of control. Let’s be the dads who receive His instruction, direction, and plan in obedience rather than turning our back on Him and getting stuck, feeling down, or spiraling out of control! I remember challenging God about forgiveness when some people hurt me and it wasn’t till years later that I discovered others were hurt too and that had I been thinking about others more than myself I wouldn’t have started my own pity party. At the moment God has prompted me to forgive and I had more excuses and reasons why I shouldn’t, couldn’t, or wouldn’t. That was the beginning of getting stuck and allowing a bitter root to take hold in my heart. That was the beginning of allowing rage and anger to take hold of my heart and mind. That was the beginning of the downward spiral and it took nearly hitting rock bottom for me to look up and cry out to God and obey. Let’s hear God and obey Him! Let’s do it His way rather than suffering through it in our own way. Let’s go through what we have to go through with Him rather than on our own! I have had the opportunity to share my story with the people who were around me at the time as God kept bringing people who needed to forgive across my doorway and I had to tell them they needed to forgive first. I’ve even gotten to share the story with a group of coworkers as part of a Story Slam event that was put on to help people get to know each other as the company was growing. (Sharing as a link rather than embedded so that only those who want to spend the extra 10 minutes have to have the space on the screen taken up.) The key is that God’s Word is full of wisdom and direction! The Holy Spirit in His still quiet voice will instruct you and guide you! Now the decision is in our hands to obey or not!

Today’s devotional has been provided by Joël and Jonathan Malm (http://joelmalm.com).

Takeaways from Today’s Devotional:
“The Love That Drives Out Anger “

‘Jesus entered the temple courts and drove out all who were buying and selling there. He overturned the tables of the money changers and the benches of those selling doves. “It is written,” he said to them, “ ‘My house will be called a house of prayer,’ but you are making it ‘a den of robbers.’ ” The blind and the lame came to him at the temple, and he healed them. But when the chief priests and the teachers of the law saw the wonderful things he did and the children shouting in the temple courts, “Hosanna to the Son of David,” they were indignant. “Do you hear what these children are saying?” they asked him. “Yes,” replied Jesus, “have you never read, “ ‘From the lips of children and infants you, Lord, have called forth your praise’ ?” And he left them and went out of the city to Bethany, where he spent the night. ‘

As I sat in the service on Sunday, Father's Day, I kept hearing Be...

As I sat in the service on Sunday, Father's Day, I kept hearing Be...