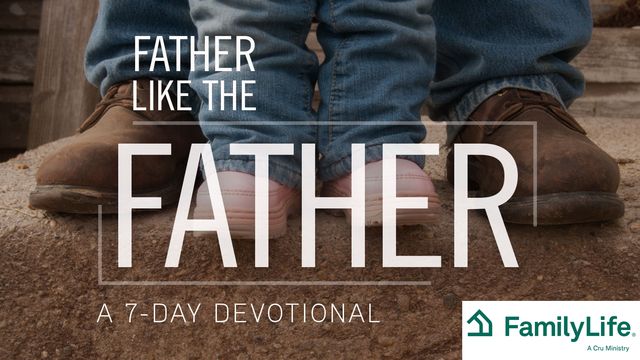 Today brings our reading and learning from the devotional Father Like The Father to a close.

I appreciate God’s leading and sorting of articles so that the topics and instruction we can get around be the dads are on point and speak the truth in love. I have been blessed with my interaction with them as they gave guidance and support for my posts. Bible.com introduces the devotional like this:

Throughout Scripture, God is called Father. Yet how does He father His children? What parenting principles can we learn by observing His interactions with humanity? This seven-day study will examine key Scriptures which will help you to father like the Father.

Today’s devotional is connected with the following scripture Deuteronomy 4:31.

‘For the Lord your God is a merciful God; he will not abandon or destroy you or forget the covenant with your ancestors, which he confirmed to them by oath. ‘

Today’s Word from God brings an incredible perspective on who our Heavenly Father is. Today’s Word along with the title of today’s devotional brings to mind what it would look like and what would it take for us to be the dads God created us to be. Let’s be the dads who are merciful! So that means we need to be forgiving, compassionate, gracious, lenient, clement, pitying, forbearing, humane, mild, softhearted, tenderhearted, kind, kindly, sympathetic, patient, humanitarian, liberal, easygoing, permissive, tolerant, indulgent, generous, magnanimous, beneficent, benign, benignant, benevolent, show mercy to, have mercy on, have pity on, spare, pardon, forgive, let off, be lenient on/to, and deal leniently with. Let’s be the dads who stick with it and will not abandon or do things that would destroy our kids. So that means we have to be the dads who won’t desert, leave, leave high and dry, turn one’s back on, cast aside, break (up) with, jilt, strand, leave stranded, leave in the lurch, throw over, or forsake our kids. It also means that we have to be the dads who won’t demolish, knock down, pull down, tear down, level, raze (to the ground), fell, dismantle, break up, wreck, ruin, smash, shatter, crash, blast, blow up, blow to bits/pieces, dynamite, explode, bomb, torpedo, spoil, disfigure, blight, mar, blemish, impair, flaw, deface, scar, injure, harm, devastate, damage, lay waste, ravage, wreak havoc on, waste, disfeature, disrupt, undo, upset, play havoc with, make a mess of, put an end to, end, bring to an end, put a stop to, terminate, prevent, frustrate, crush, quell, quash, dash, scotch, vitiate, sabotage, upset someone’s apple cart, cook someone’s goose, bring to naught, annihilate, wipe out, obliterate, wipe off the face of the earth, wipe off the map, eliminate, eradicate, liquidate, extinguish, finish off, erase, root out, extirpate, kill, slaughter, massacre, butcher, exterminate, decimate, defeat utterly, beat hollow, win a resounding victory over, vanquish, drub, trounce, rout, crush, give someone a drubbing, overwhelm our kids. Let’s be the dads who will build up, preserve, restore and raise up our kids. Let’s be the dads who will stick by, claim, and keep our kids. Let’s be the dads of integrity and stand on our words, say what we will do, and do what we say. Let’s be the dads who will live our lives with honesty, uprightness, probity, rectitude, honor, honorableness, upstandingness, good character, principle(s), ethics, morals, righteousness, morality, nobility, high-mindedness, right-mindedness, noble-mindedness, virtue, decency, fairness, scrupulousness, sincerity, truthfulness, and trustworthiness. Let’s be the dads God created, purposed, and desires for us to be.

Today’s devotional has been provided by Carlos Santiago and FamilyLife (more details can be found http://www.familylife.com)

For more information on communicating with your kids listen to, Blessing Your Child Through Your Words on FamilyLifeToday.com.

With the song stuck in my head, I wanted to include it here so that as we close out on this devotional series we can pause and be encouraged.